STAY UP TO DATE

There was an error retrieving images from Instagram. An attempt will be remade in a few minutes. 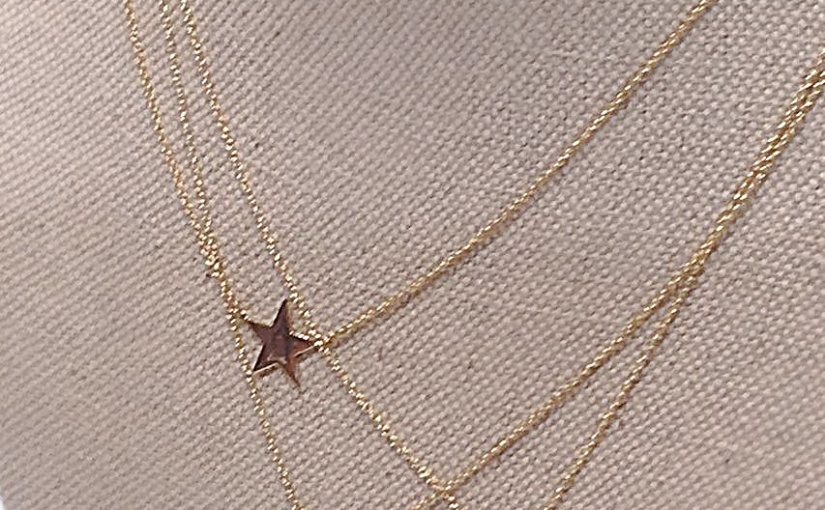 As you all know Kelly Rutherford has a huge place in my heart and I’ll always support her as much as I can. She brought out her own jewelry collection recently and I just have to show you the pieces because they’re so beautiful and unique. When I saw her last week I got two necklaces (huge thank you again!) and I instantly fell in love with them. I’ve been wearing them nonstop since. I generally love delicate necklaces, earrings and bracelets and don’t often wear striking things. That’s one thing why I love her collection so much. Second is, you can combine as much as you’d like together (or with other jewelry) because I think the necklaces especially look so great when you wear two or three at once. Third the quality is really good, everything is made of 14K yellow gold. You can get hearts, stars and moons in three different sizes and also double earrings, which I also love so much. The double moon earrings are to die for, seriously! The website to purchase the jewelry will be online soon! Meanwhile she has many events at Blushington in NYC or LA where you can get the pieces, or take a look at Broken English Jewelry. Also follow her on Instagram to get any updates and because she’s the cutest!

PS: Thanks so much to vonRuhm for letting me use your photos! 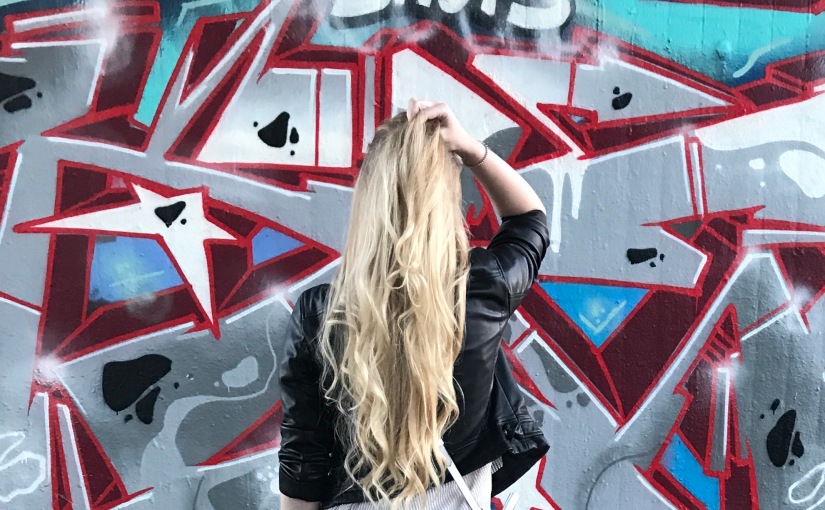 First of all happy mother’s day to all the lovely mothers out there! Already showered my maman with hugs and kisses. Hope you enjoy the (not so sunny) Sunday and spend lots of quality time with your mom and family. Yesterday I went to a typical Bavarian festival. Have I ever mentioned that I love Bavaria? I also love my casual clothes to the moon and back and I’m always going back to them. Still I always like to add a little eye catcher here and there, that’s why I love my Guess Slippers for example. Thank god that everyone is into glitter lately, especially my fave fashion brands. Cause a little sparkle never hurts. Also look at this cute little Coccinelle bag. I think this is gonna be my new favourite. Anyway hope you can get some inspiration from this and I wish you a wonderful day! 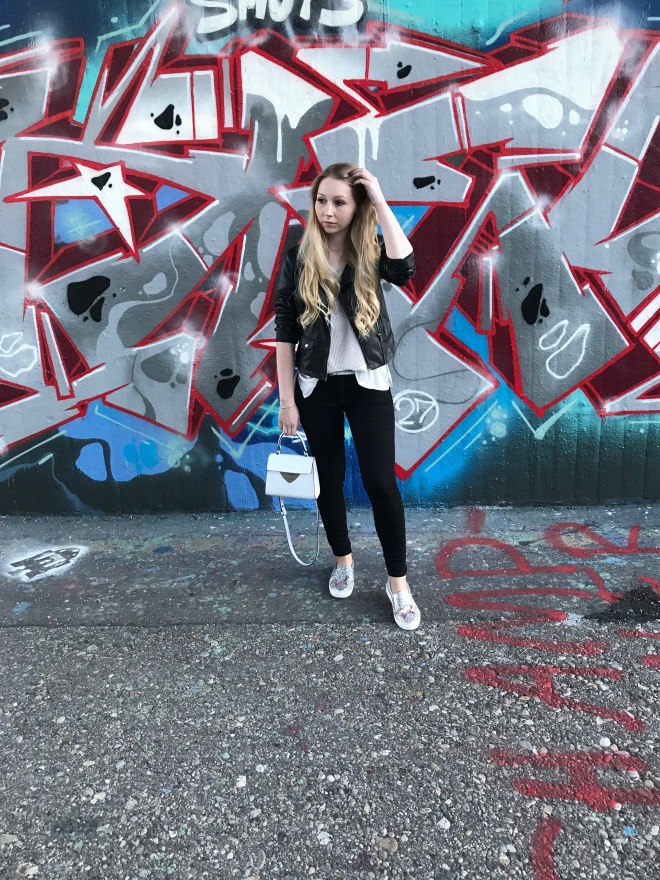 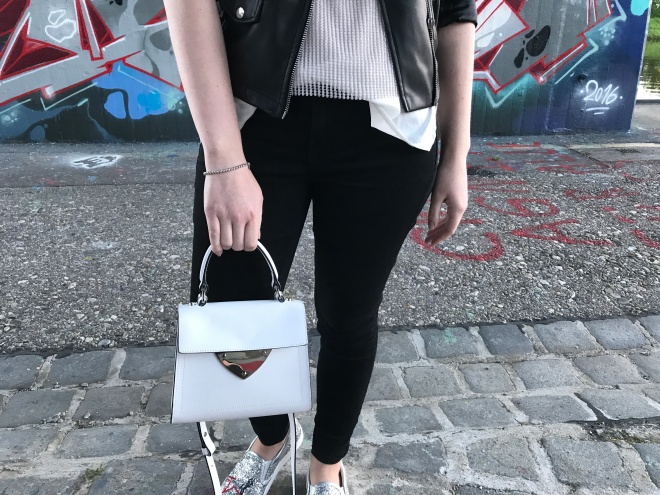 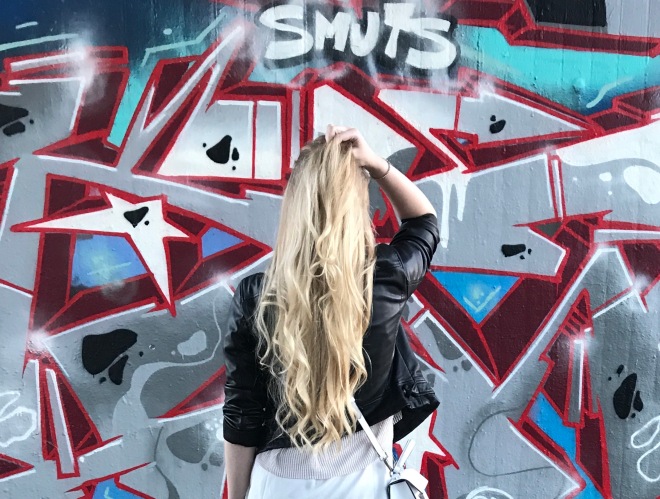 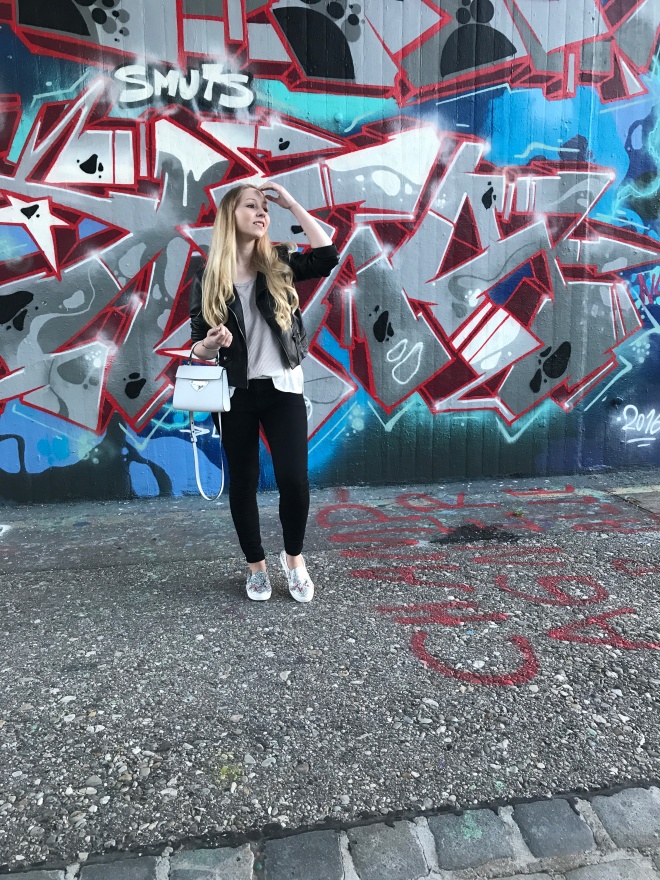 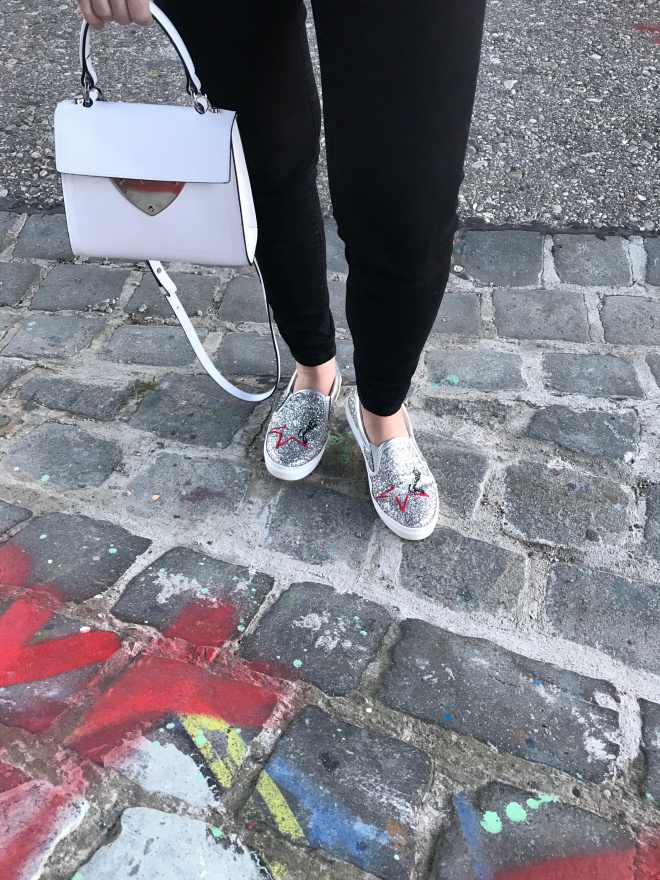 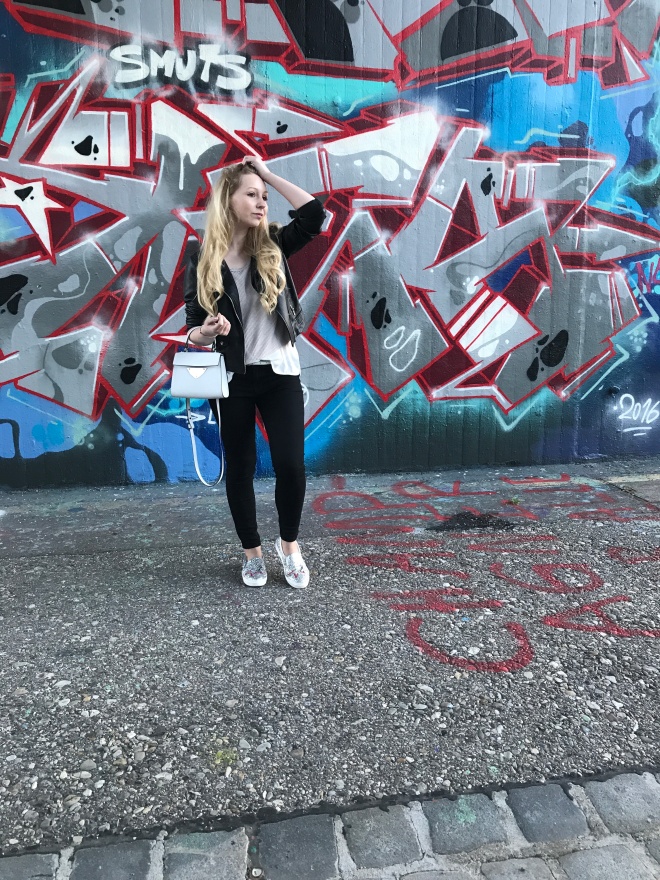 PS: Thanks to my photographer Marie 🙂 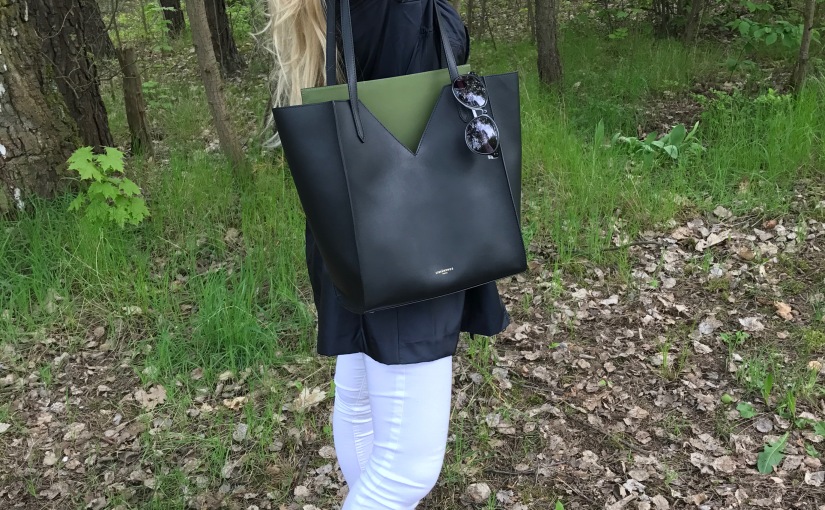 As some of you may know from my Instagram story or my first Travel blogpost, I was in Rome last weekend. I got invited to attend the launch of the 2017/18 collection of Lisiánthus Roma. The label was created by a friend of mine, Massimiliano Mastrangelo. He is only 16 years old and currently the youngest Creative Director in the world. He’s such an inspiring, lovely person and his designs are seriously breathtaking. I (or my mom, I stole it from her but pssst) got the Contrasto bag in the colours black and green. I love totes anyway but this one is really special with it’s unique shapes and colour combinations. There are 2 more different colour options available for this bag. Also you have to check out all the other amazing bags and clutches on the website. I really love the Miss Rutherford as well, maybe it’ll be my next one!  www.lisianthusroma.it 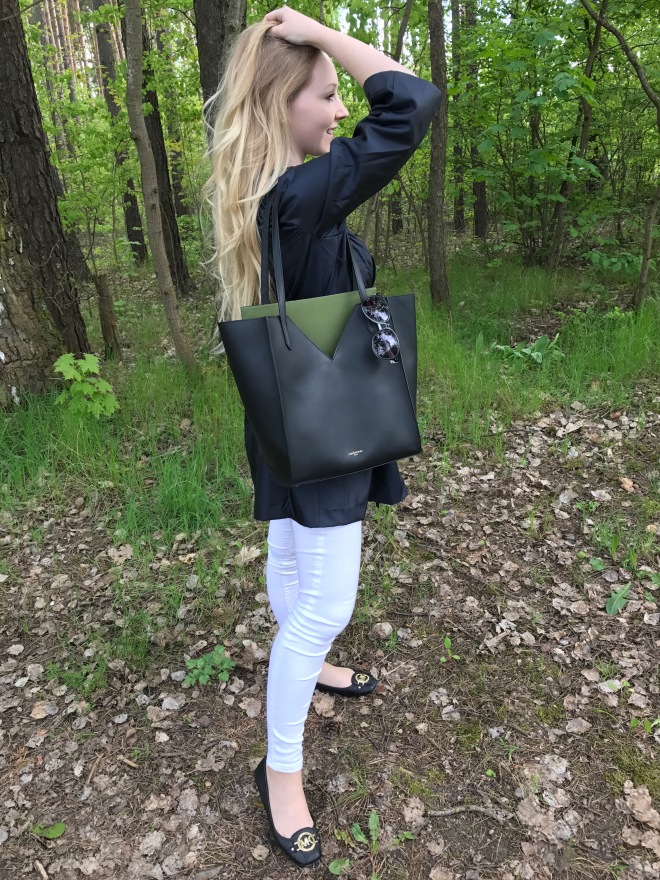 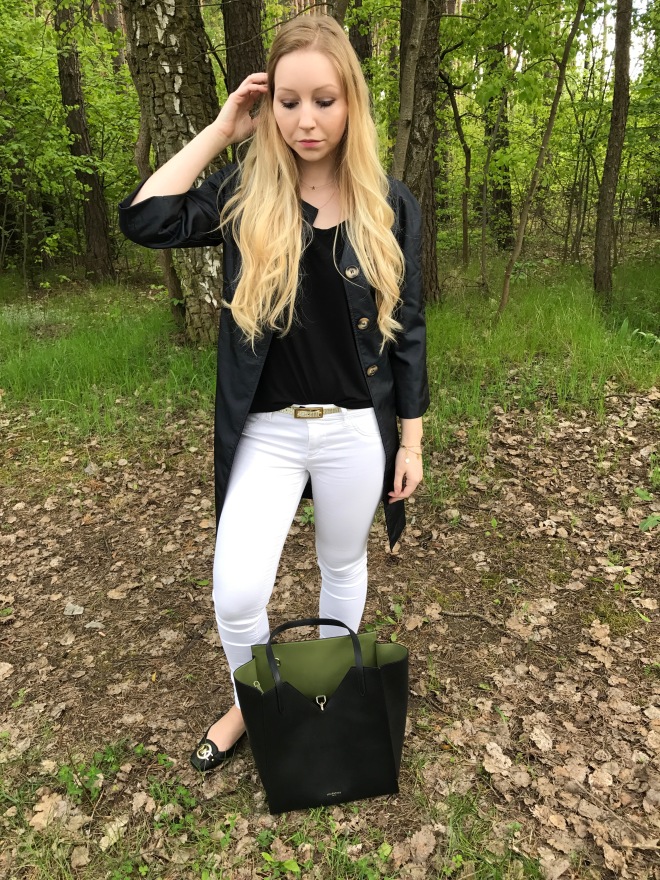 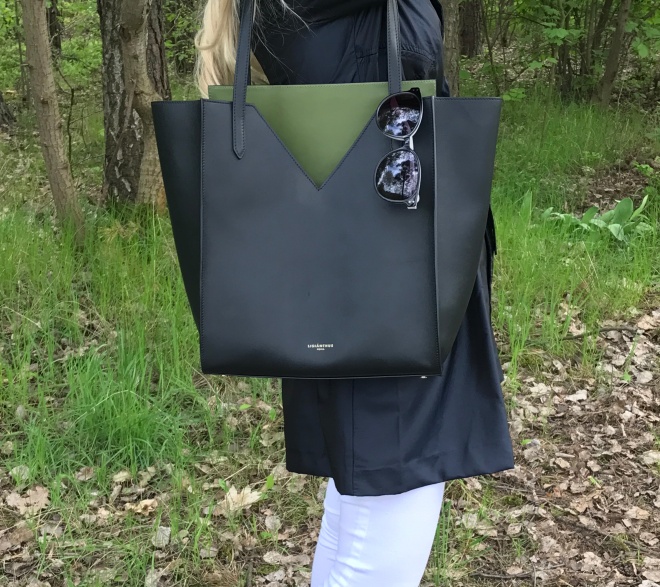 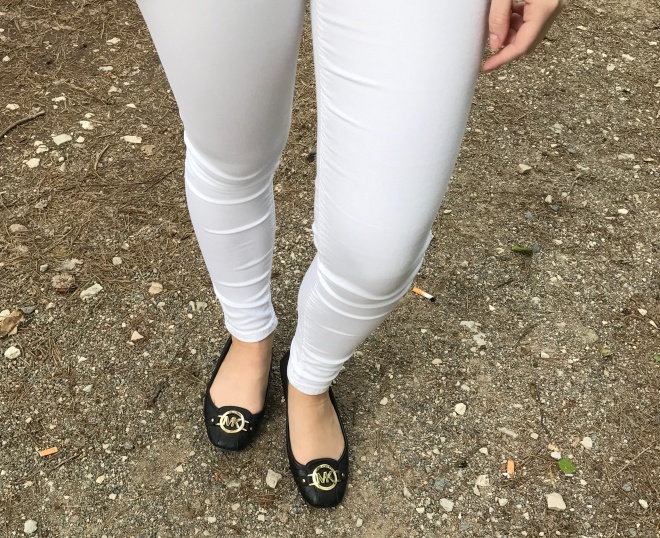 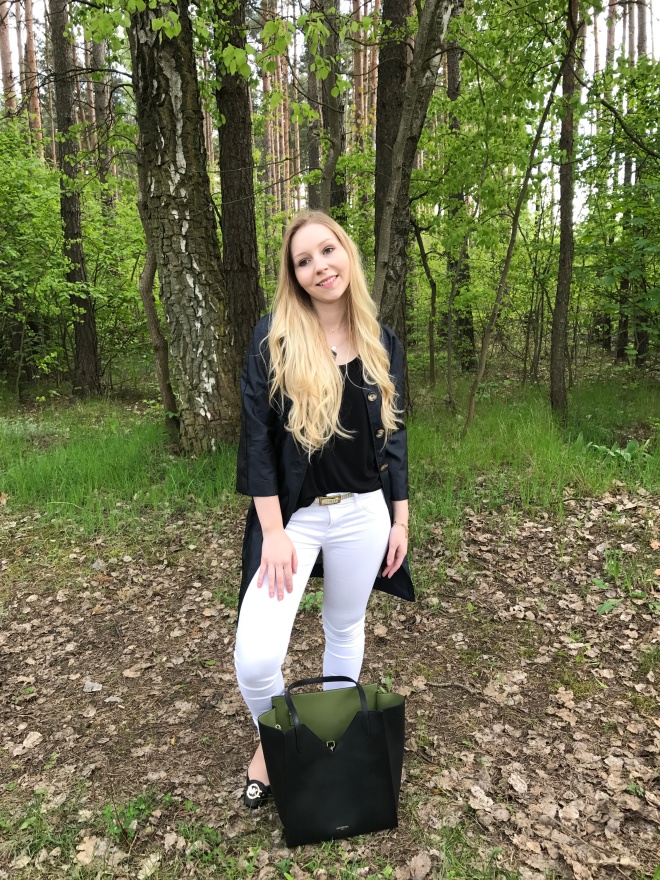 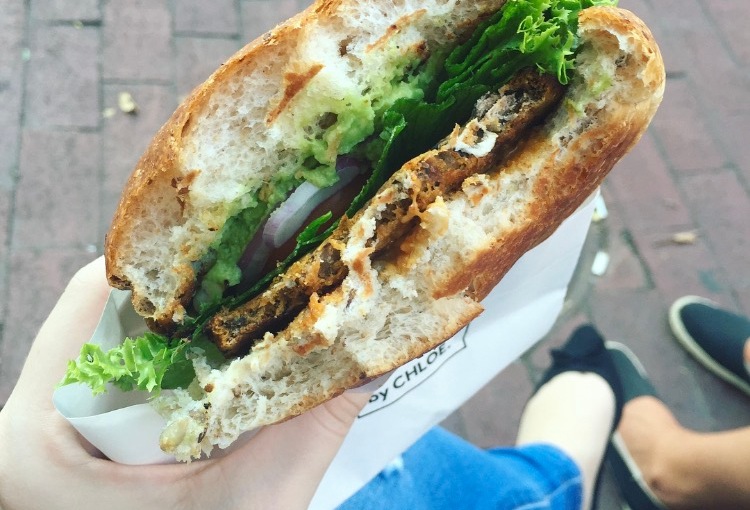 As you all know (or can see on my Instagram feed) I’m a huge New York City lover. I’ve been there for about 4 weeks, which definitely isn’t enough for me and I want to go back as soon as I can. One reason why I love New York City so much is the food. It’s just pure food heaven. You can get anything you can think of, no matter if it’s Indian food or Mexican food, raw cookie dough, alcoholic ice cream or vegan burgers.

Here are my Top 5 Places! 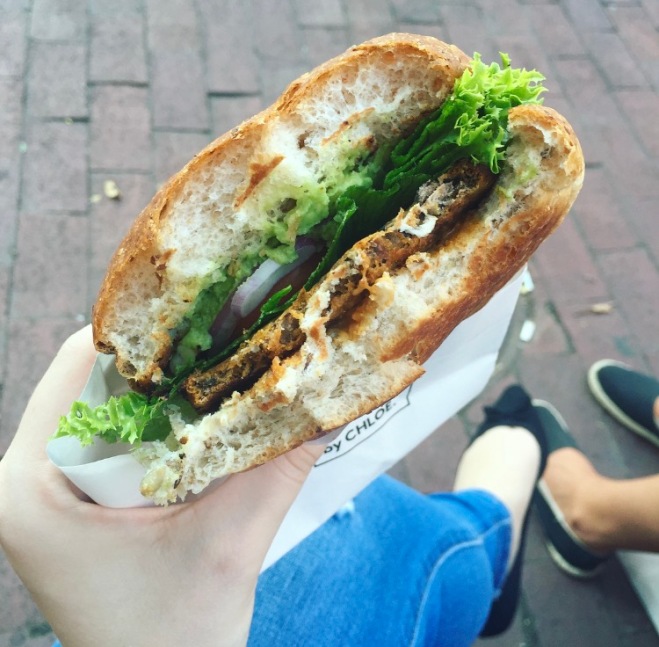 It’s on 185 Bleecker St, not far away from the Washington Square Park. By Chloe is a vegan burger restaurant and I just wanted to try it out because I heard so many good things about it. I went for the Guac Burger and some sweet potato fries and I never thought vegan things could taste this good. Also the location is so cute and if you can’t find a place to sit just go to the Washington Square Park, sit down and enjoy your meal without having to rush (wait is that even possible in New York City?). 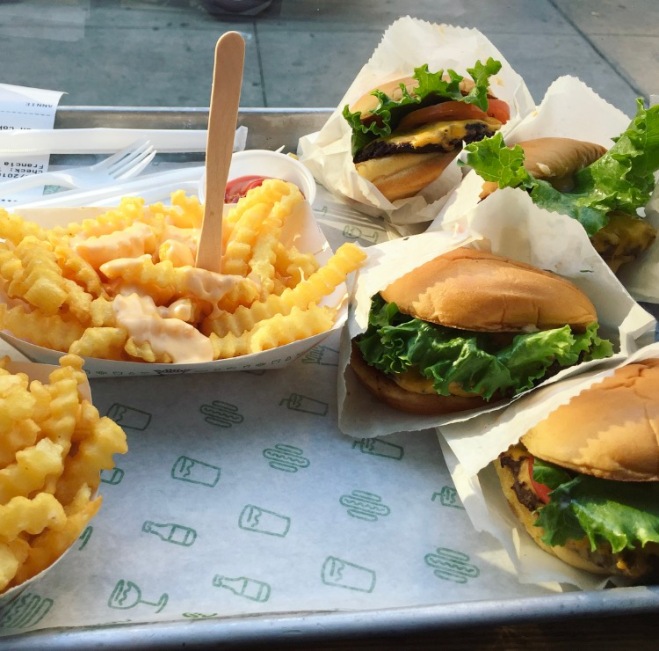 Here in Germany we only really have Mc Donalds and Burger King as a fast food chain, that’s why I wanted to try out another one. I know Shake Shack isn’t probably the healthiest place to go, but you at least should give it a try. Go for the cheese fries and a normal shack burger and you’re not going to be disappointed. Burger Heaven! 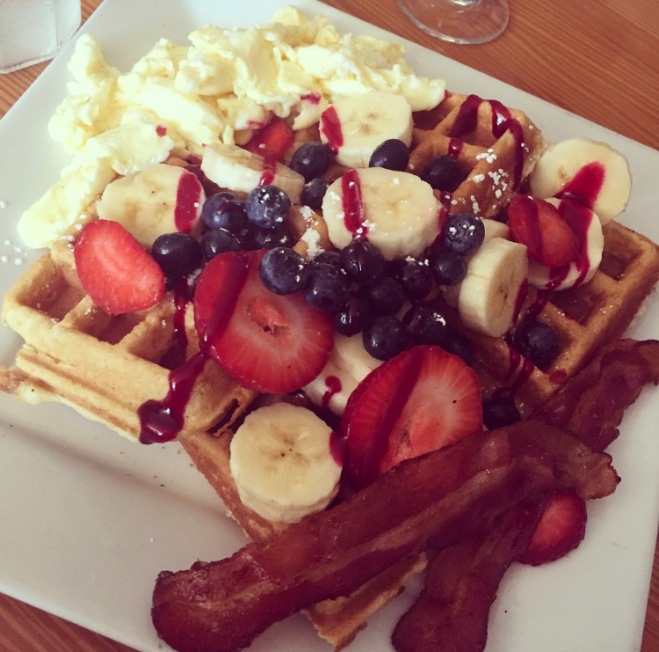 Since a friend of mine lives in Brooklyn and basically loves all about it, we had to go for brunch there obviously. It was one of the best ideas ever, cause Ringolevio in the Humboldt St is seriously a jewel. I got waffles with blueberries, strawberries, bananas and also some scrambled egg and bacon. That mix is very odd for me as a European, nonetheless it tasted amazing. I would definitely recommend going there! 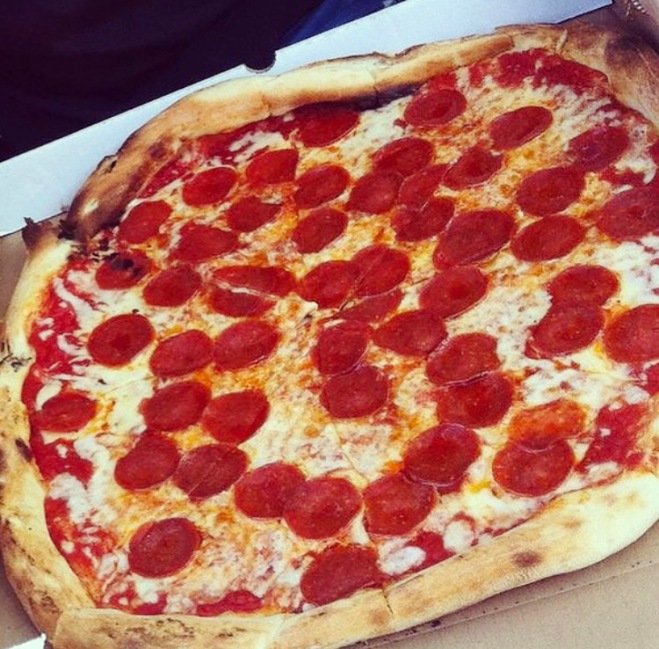 The best pizza ever! And I’m serious! Whenever I’m like oh pizza would be good now, I think of Joe’s Pizza. I went there so often and didn’t even feel bad about it. The place itself looks a bit run-down, again for me as a European. But you shouldn’t worry about that because the food is super fresh and so delicious! There’s also a cute little park area right next to it to enjoy your slice. Overall one of my favourite places in whole New York City. 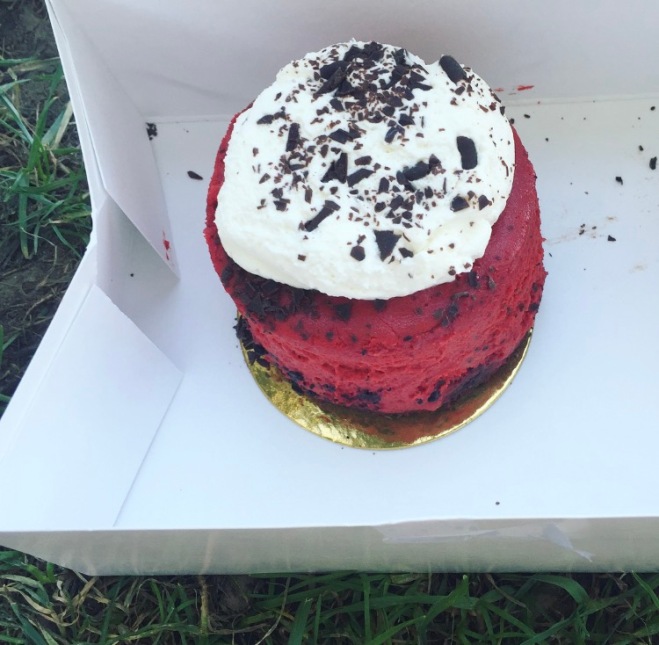 If you watched Sex and the City you probably heard of this place before. It became famous after being mentioned in one episode. The store in the West Village is the original one and it looks so cute. I think it’s safe to say that I can recommend everything. I would try the Banana Pudding first, you never experienced something like this before, believe me! Also a thing I’m thinking about so often. Also you can’t go wrong with the cupcakes or cheesecakes, they’re so good! Even the lemonade there tastes like heaven, that’s why this bakery is my number one place to go!

Hope you enjoyed the post and hopefully I could give you some tips.